If, like me, you thought we saw the last of the heavy machinery on Dumyat, you were wrong. In the last few days diggers have arrived again to (at the expense of SP Energy Networks) graciously bestow upon us a new path from the Sheriff Muir road car park to the very summit.

Updated 9/9/2017, 09:15; see the end. Formal complaints to be addressed to SPEN on customercare@spenergynetworks.com

In broad strokes, the situation as it emerged is this: when SPEN was granted permission for the Beauly power line, it came on the condition that they will do some 'good work' for the locals in return; in the Stirling case this happens to include work on the Dumyat path.

That the main path is in need of some attention, and has been for some time, is not something I would dispute. There is a significant amount of erosion taking place, which I have written about at length before (complete with 60+ images documenting the erosion patterns). But what is happening on Dumyat just now is not the answer. As I see it, there are two big problems here: the contractor's approach, and the lack of understanding how the hill is used.

The contractor is rather heavy handed and appears ill prepared. There is an apparent lack of proper planning (let's just bring a big digger, that will do it), the lack of understanding the geology of the hill (didn't expect it to be this 'rocky', doh), the lack of any sympathy for the natural features of the landscape (levelling uneven sections of the exposed bedrock, really?!). SNH has guidelines on how upland paths should be constructed, and this is not it.

The extent, and progress, of the erosion on the hill varies along its length, depending on the gradient and what is found immediately below the surface. On the steep sections, in some cases the erosion exposes very loosely bound rock and/or gravel deposits, which then suffer from bad water run off. These are the places that most require some stabilisation and mitigation, but in fact this is mainly limited to two locations, both on the upper part of the hill (to be precise, around NS 8278 9772 and NS 8352 9763). These places would benefit from some drainage work, and perhaps relocation of the path, but it needs to be done sensitively and with care, not with a bulldozer.

In other instances of the steep ground, the erosion relatively quickly exposes bare, but solid bedrock. While it's not pretty when it is happening, it simply stops there once the rain cleans up the rock. Yes, if you have been going up this hill for many years, the path has changed dramatically at these places. But it is questionable whether any intervention will achieve anything meaningful here. For example, the contractors seem set on evening out the level exposed section of bedrock around NS 8157 9788 with loose soil. It is not clear to me what the objective of that is, and why such resurfacing is needed at all -- this part has remained stable for many years.

On the easier angled sections the path suffers limited water run off. The damage here falls into two main classes. There are some boggy areas in the vicinity of natural springs (notably NS 8270 9777 and NS 8319 9774). These would benefit from board walks being constructed; the alternative is re-routing the path, but on that see below.

Apart from these natural bogs, the damage on the easily angled parts of the path is almost entirely due to soil being moved by feet and wheels, the effect of water run off is minimal. As such the path tends to broaden (see the link above for more on this), but remains stable in terms of its depth. It is, again, arguable that these parts will benefit from the work being done in any way. The only answer here would be confining the traffic to a narrow corridor, and that brings me to the second problem with the work being undertaken.

It would appear that whoever approved the current solution has absolutely no understanding of how the hill is used. There are many of the regular local users who are quite happy with the hill in its rugged semi-natural state, and they will more likely than not avoid the new path. This will include many of the local hill runners, for whom the current landscape offers excellent and easily accessible training ground. And it will include the mountain bikers who really happen to like the hill the way it is, and even the way in which it evolves (mountain biking nowadays is generally not a means to travel distances, but rather it is about the challenge 'under the wheels').

And here lies the main problem. If the objective of this exercises is to provide the good citizens of Stirling with an easy, all-ability, access to Dumyat, then the contractors are following the wrong line. There is much to be said for such a path, but it would need to follow the natural contours of the hill. Such path would have the benefit of splitting the descending bike traffic from those on the path. But sanitising the current path along its length will simply result in much of the current traffic being shifted to its immediate sides, and the erosion will continue spreading.

When path work is done not understanding, or ignoring, the mountain bike use case, it will fail to relieve the erosion pressures; there are examples of this emerging elsewhere (Ben Lawers, Cairngorms). On Dumyat the bike use is well established, people have been riding bikes here for as long as mountain bikes existed, i.e., for over 20 years. It is wholly unjustifiable not to take them into account.

More so, like it or not, mountain bikes are part of Scotland's outdoor landscape, and they are going to stay, accounting for a significant chunk of Scotland's tourism revenue. Dumyat is a fairly insignificant knoll above Stirling, but it foreshadows issues that are emerging elsewhere in Scotland's bigger hills. Mountain biking is no longer the niche pursuit it once was, and we need to start seriously talking about how it fits in into the outdoor pursuit family and into our hills.

So, SPEN has now released a PR statement about the work, which includes a picture of a short segment a path upgrade from Ben Vorlich, and states:

The works will form an entirely natural upland path developed in soil and stone ... This will help to prevent further severe erosion ... The aim is not to create a formal path but to replicate the existing path using the same materials in a form that will support ever increasing users and user groups visiting the area.

I'll simply invite the reader to compare the PR speak and the imagery with what is, in fact, happening on Dumyat:

Sensitive use of heavy machinery: 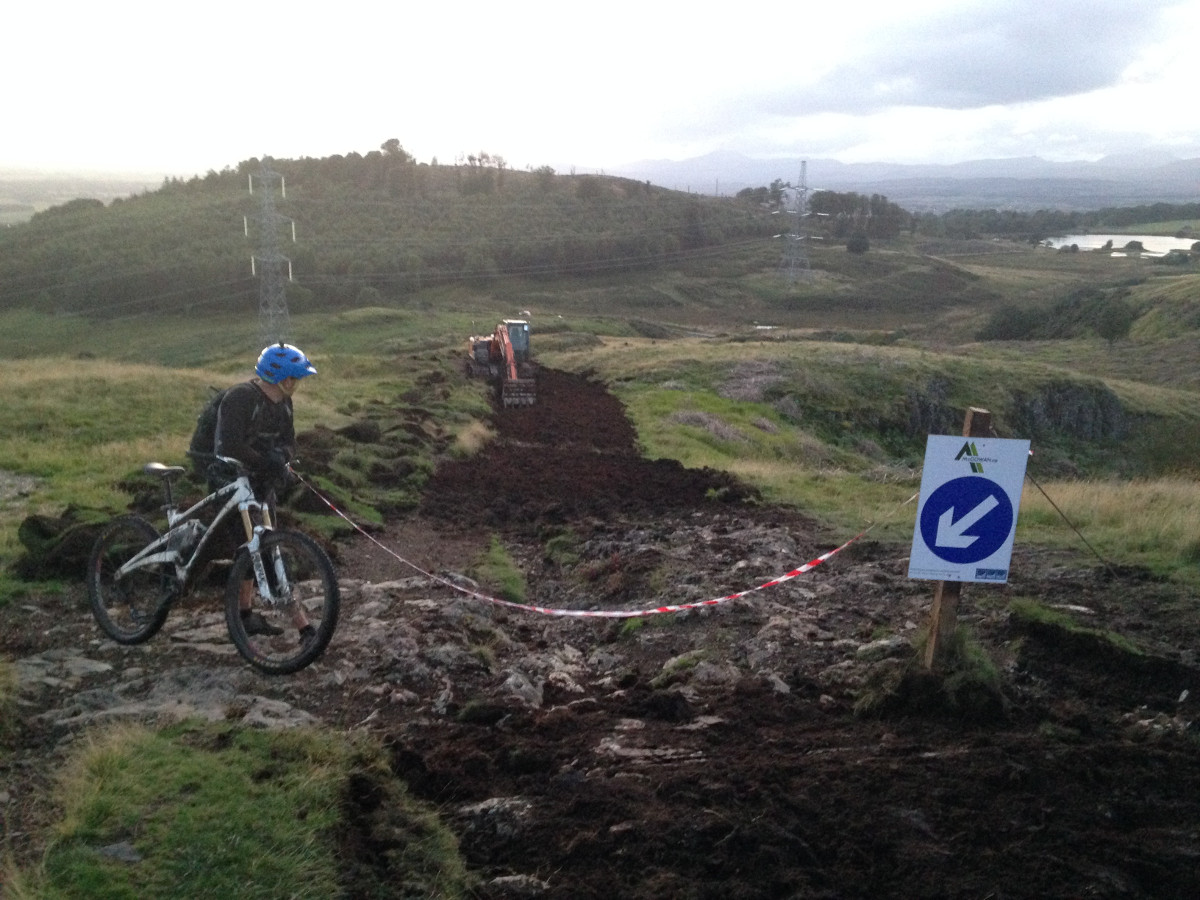 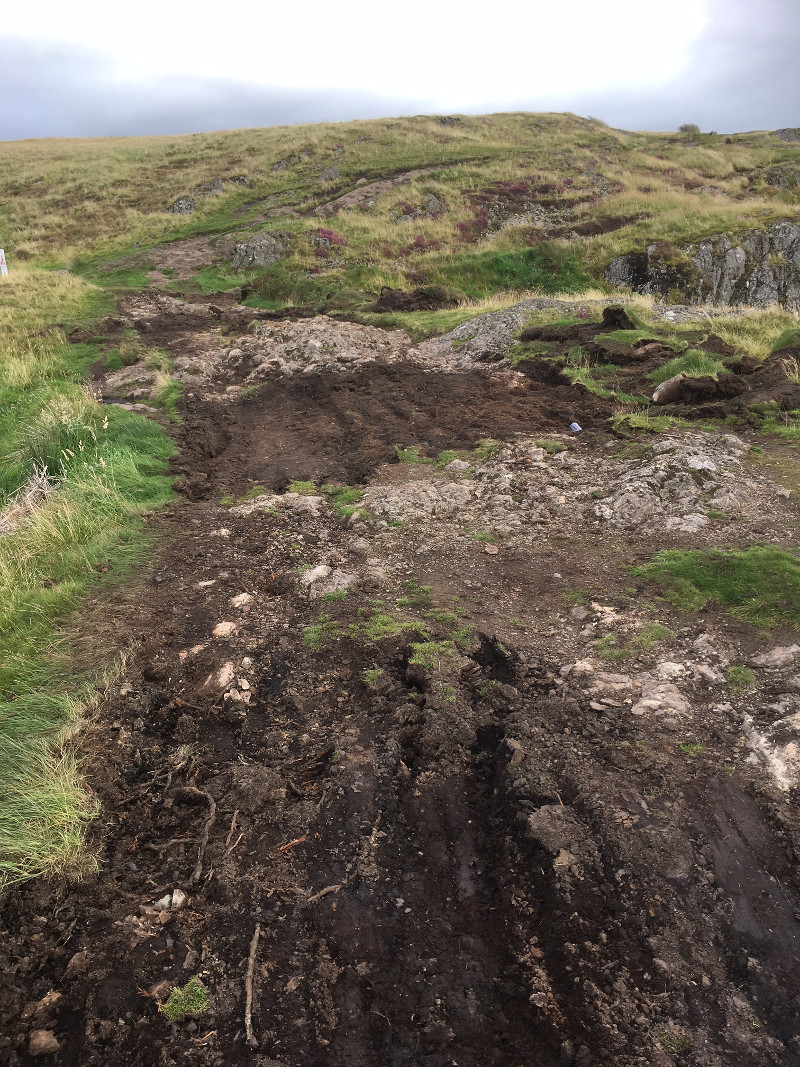 Not a formal, but entirely natural, path: 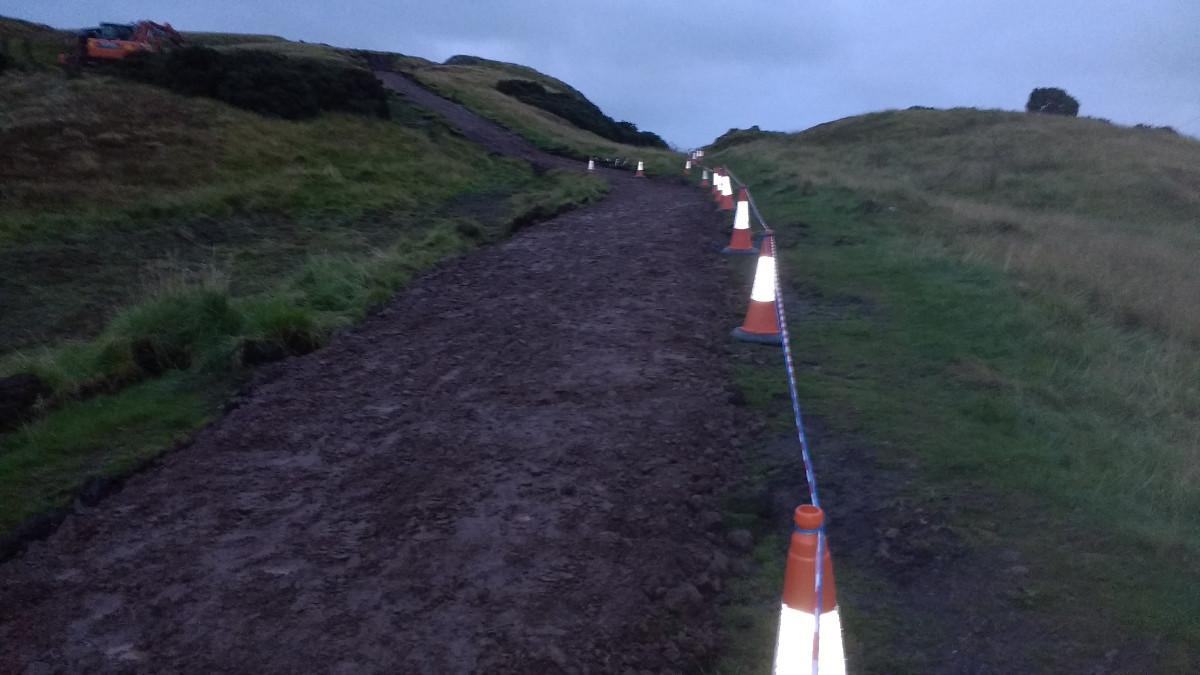 Controlling severe erosion (things are looking just great after one afternoon of rain): 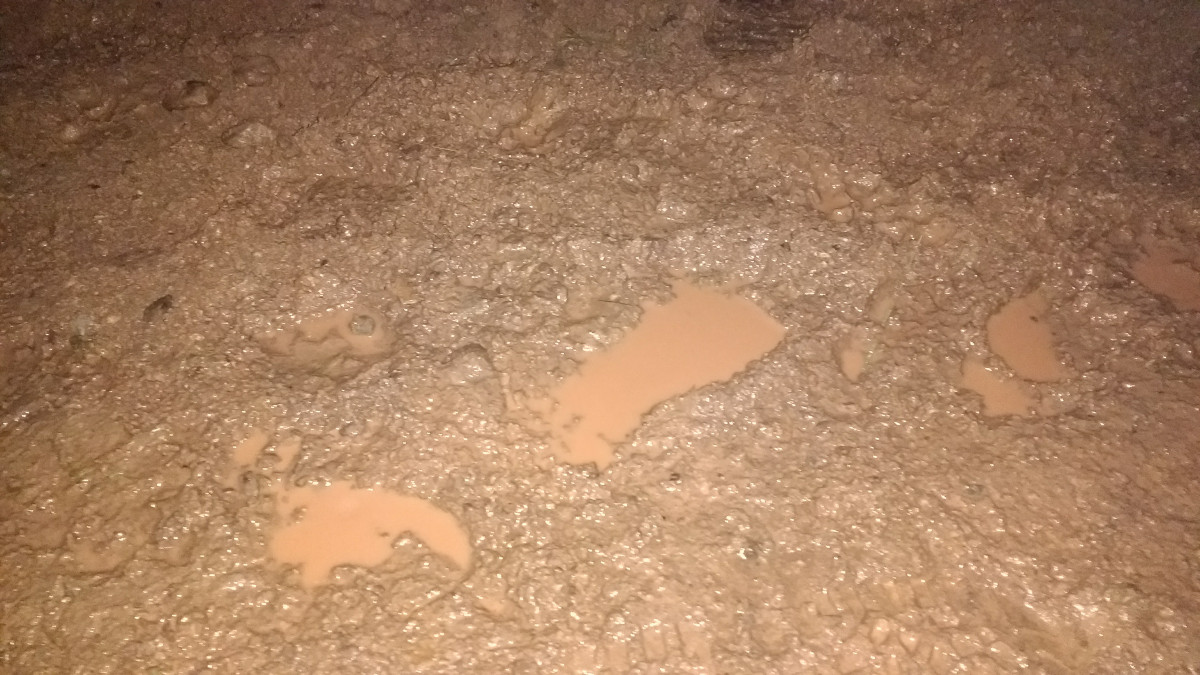 This needs to stop now. If, like me, you are concerned about what is happening on Dumyat, please send a formal letter of complaint with your concerns to SPEN on customercare@spenergynetworks.com.

I have just returned from a brief visit to Dumyat, and, as hard it is to believe, things have taken further turn for the worse during today, as the following images will illustrate.

The first image shows the start of the track. An attempt has been made to neaten it up by laying down bits of turf along its sides. However, it should be noted that there is no topsoil present here. The area here was exposed down to bedrock, which during the Denny - Beualy construction was levelled out using grey industrial hardcore. The orange path in this picture is barely a couple of inches of soil that appears to have been scraped from the hollow on the left of the image, and the bits of turf were removed from elsewhere and simply laid on the old hardcore: 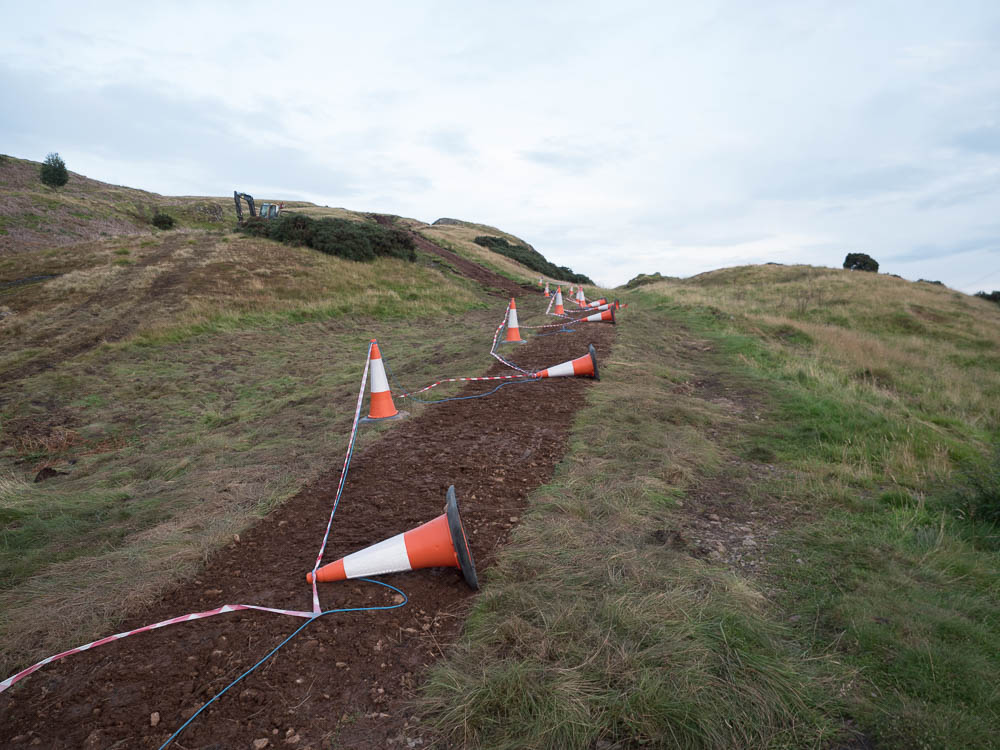 The next image shows the old hard core and how the turf has been laid onto it. Considering we are now outside of the growing period, it is very unlikely that much of this will survive the wet winter months. 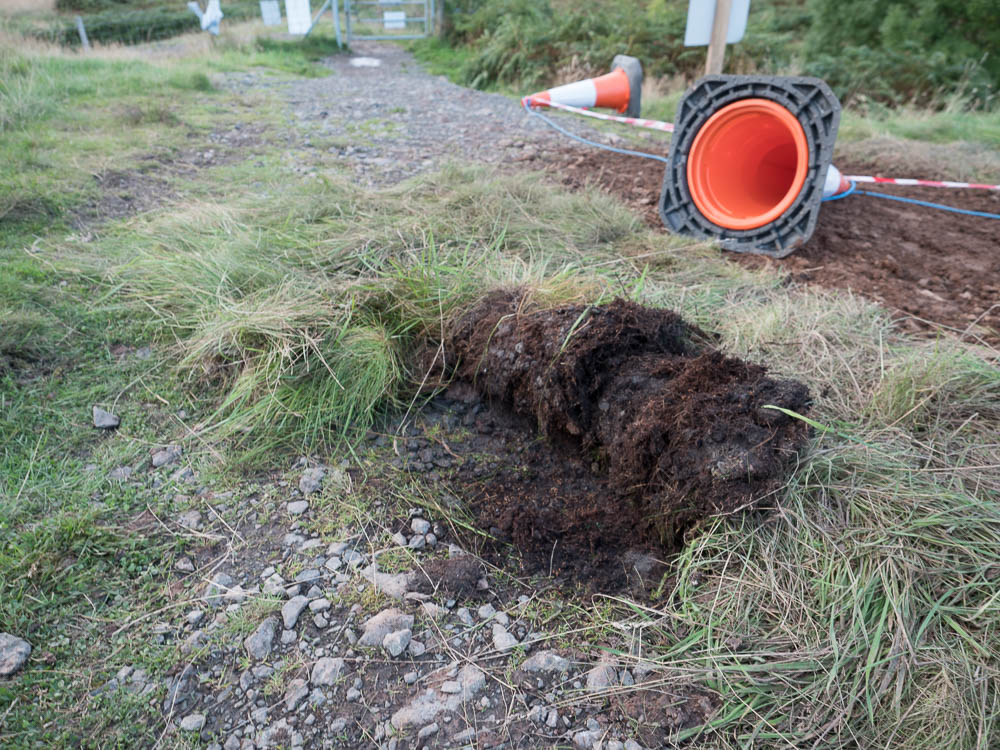 The hollow that seems to have been used to excavate the soil for this section of the path, covered in badly damaged turf: 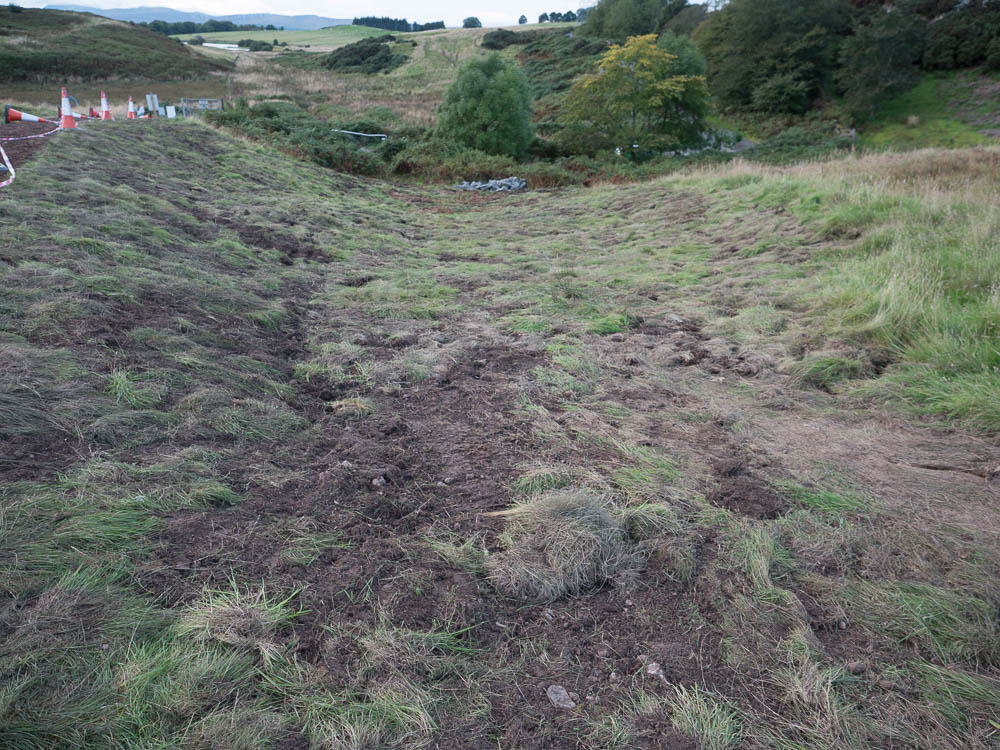 The next image shows the start of the first rise. The original surface here was bedrock, part of which is still visible left of the path, and thin layer of intermittent turf, forming a pleasant green slope. The turf has been stripped, and the bedrock covered with a thin layer of topsoil brought from elsewhere: 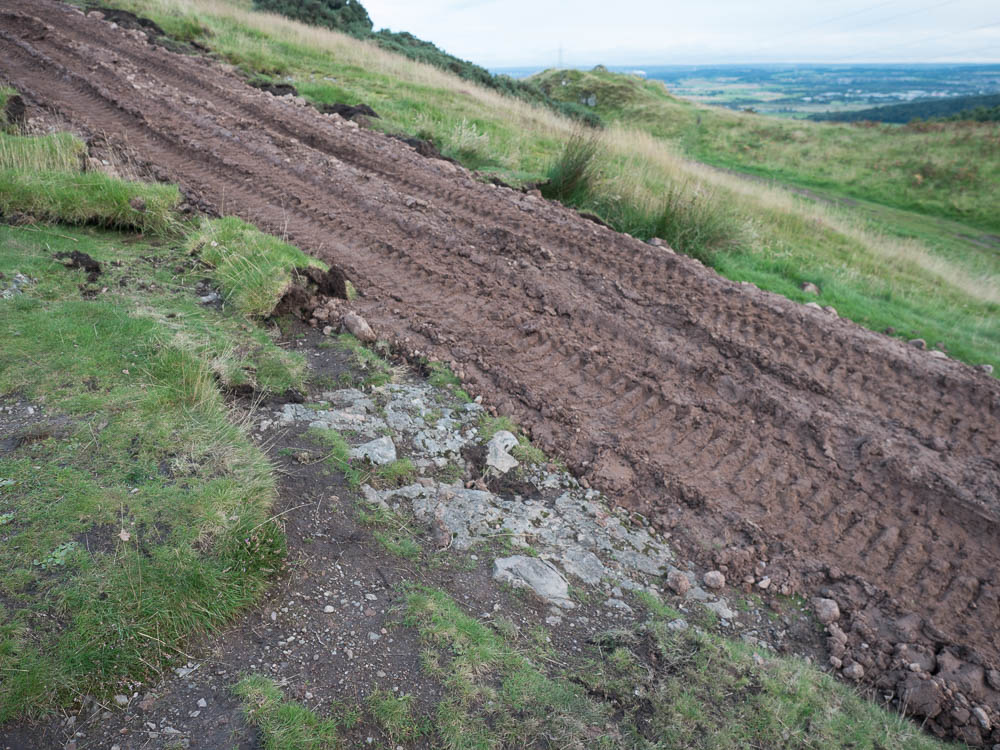 Along side the entire length of the track being worked on, there is extensive damage to the turf, which at places has been intentionally stripped for no obvious reason. The area in the first picture is of particular concern, because the loosely bonded gravel underneath has been exposed and will be subject to rapid water erosion -- this is the primary erosion pattern on the hill. 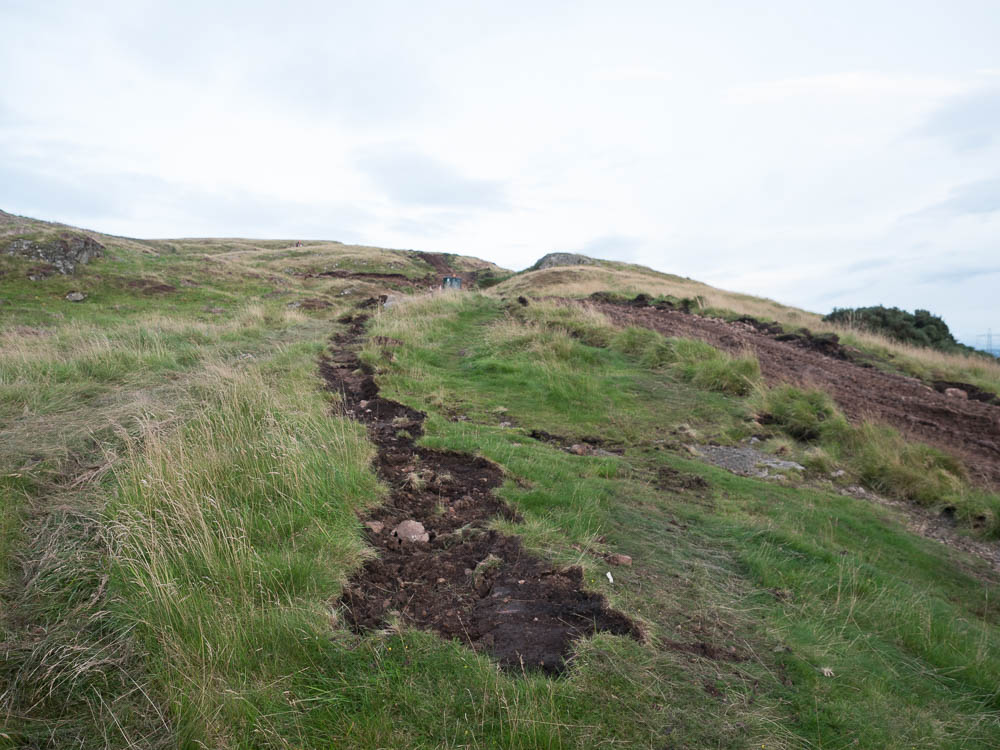 Looking back down the initial rise: 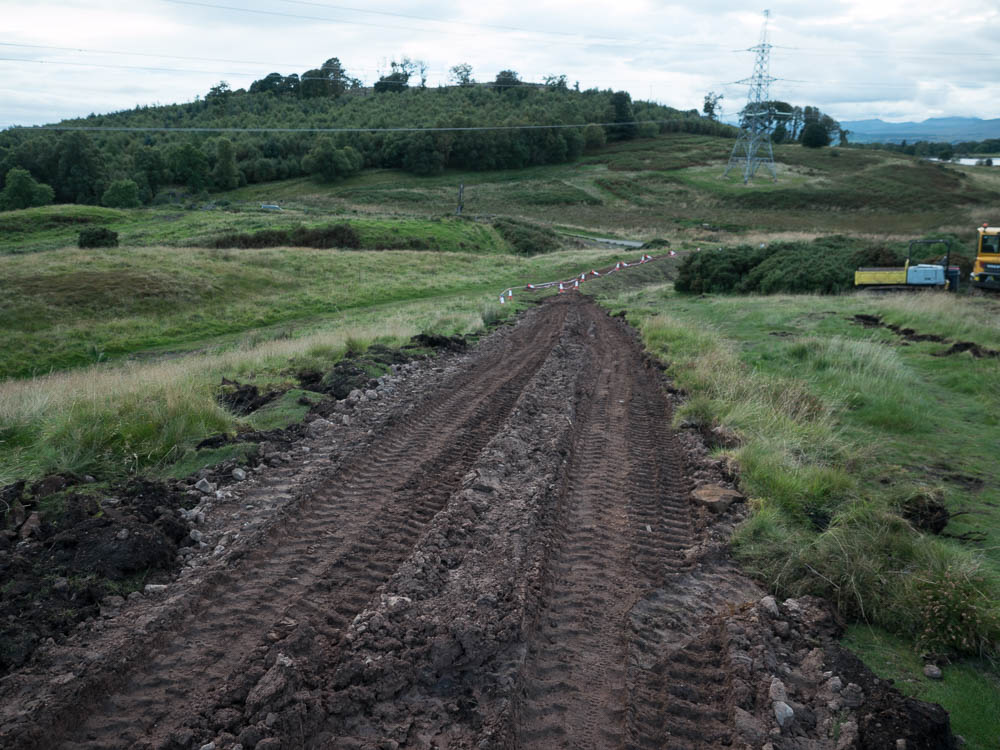 And the damage to the side of the track: 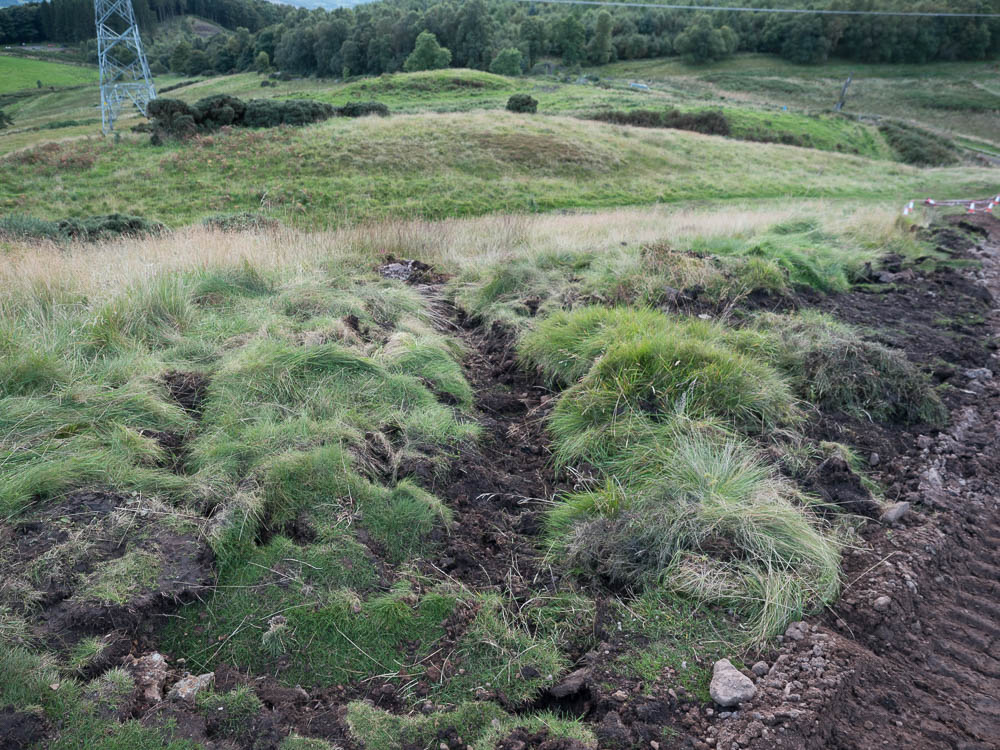 This area originally contained a natural rock step. This has been incomprehensibly levelled out with large amount of material excavated from the left of the track: 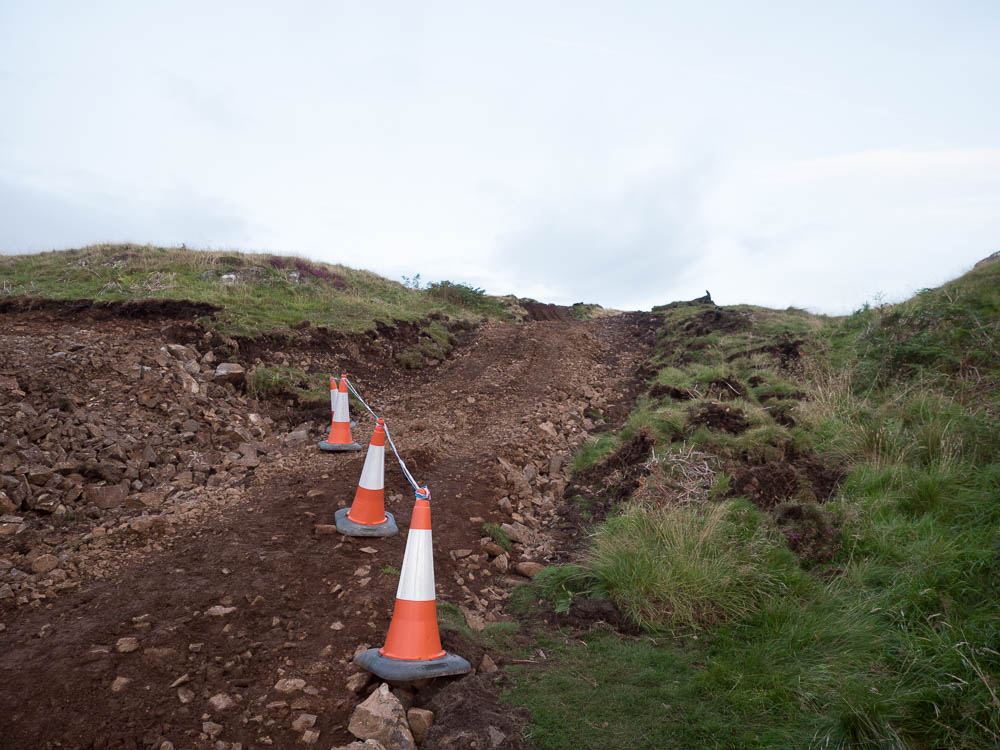 The next image shows the excavation area. As the result of the excavation the side of the hill has been exposed to water run off, and will deteriorate rapidly during the winter months: 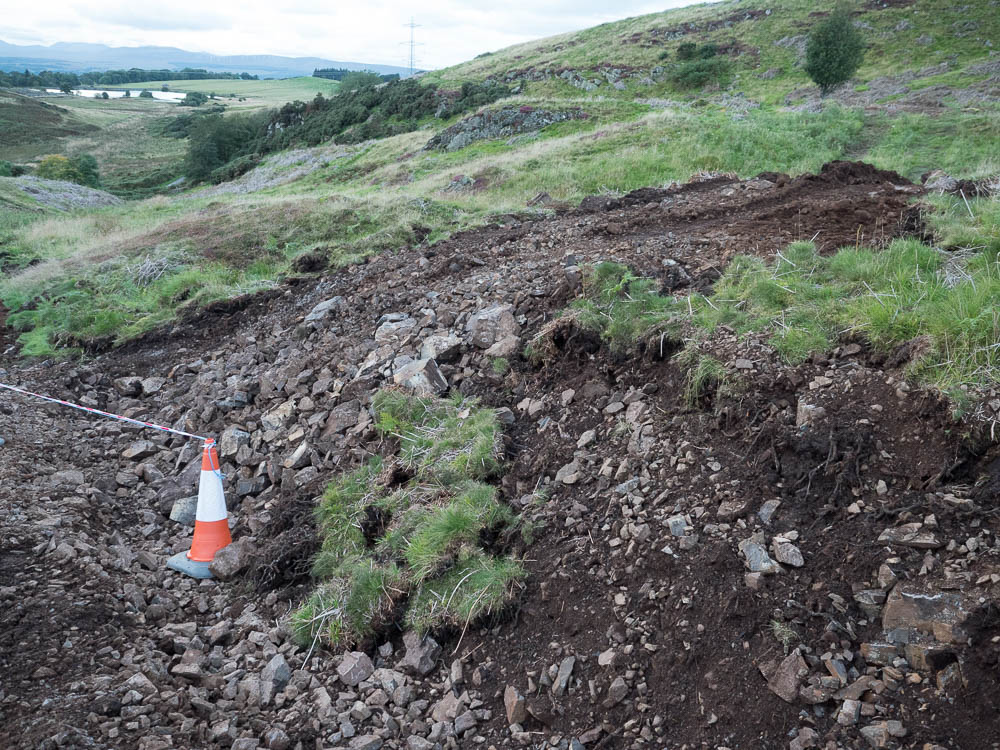 Another natural rocky feature being levelled out; the material for this seems to have been simply dug up to the side of it, leaving deep ditches on both sides. The track at this point is somewhere in the region of 7-8m wide: 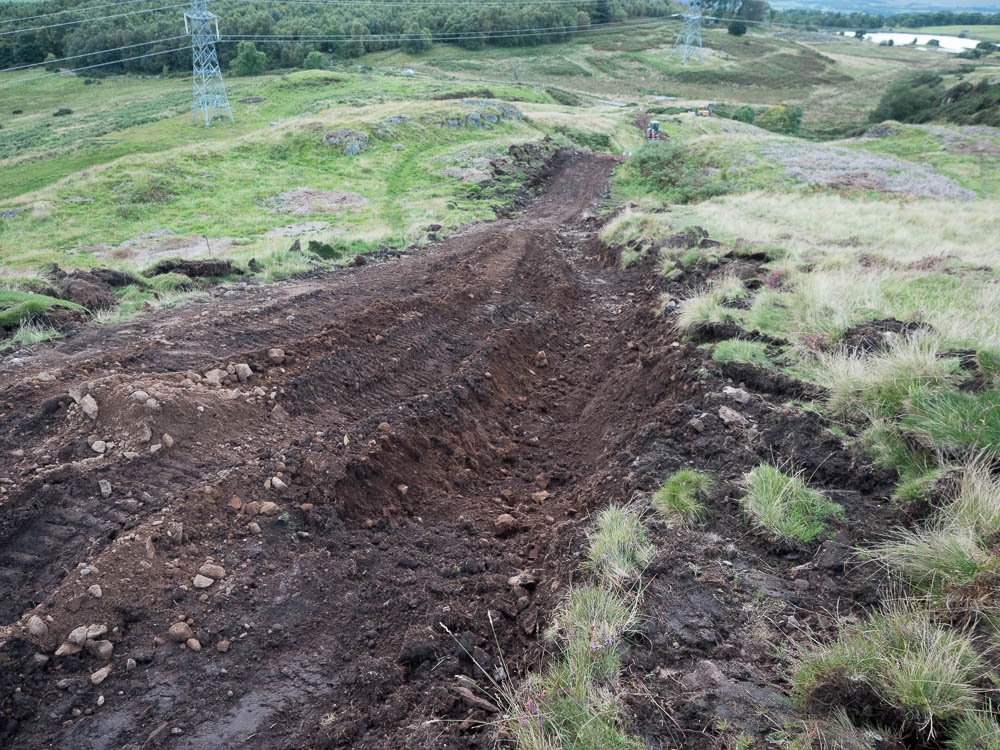 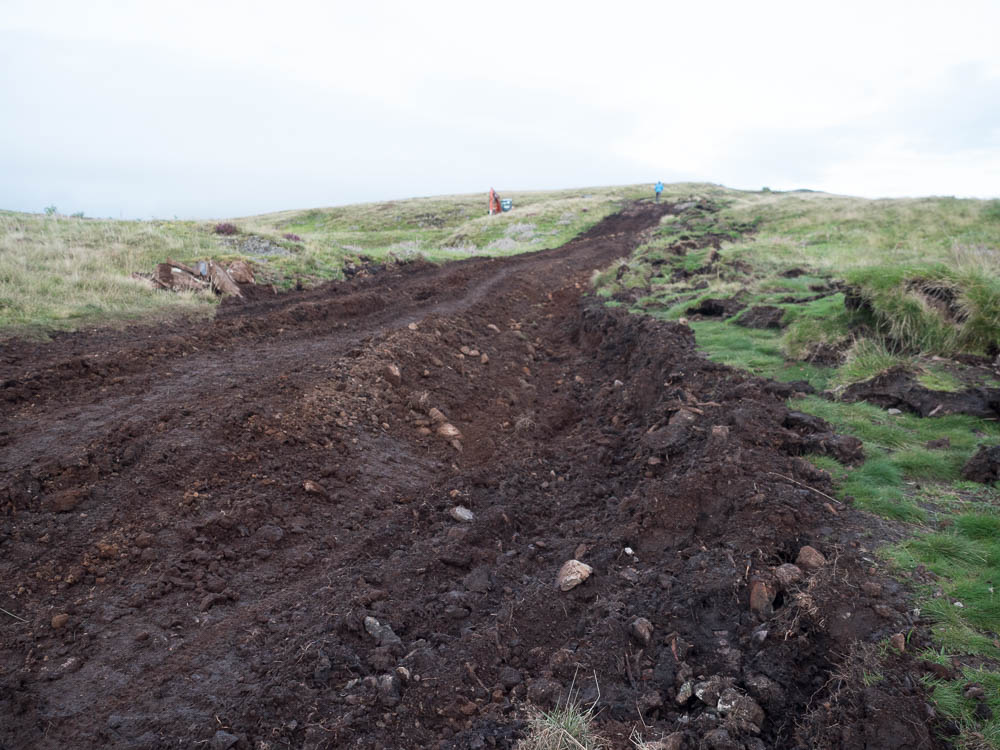 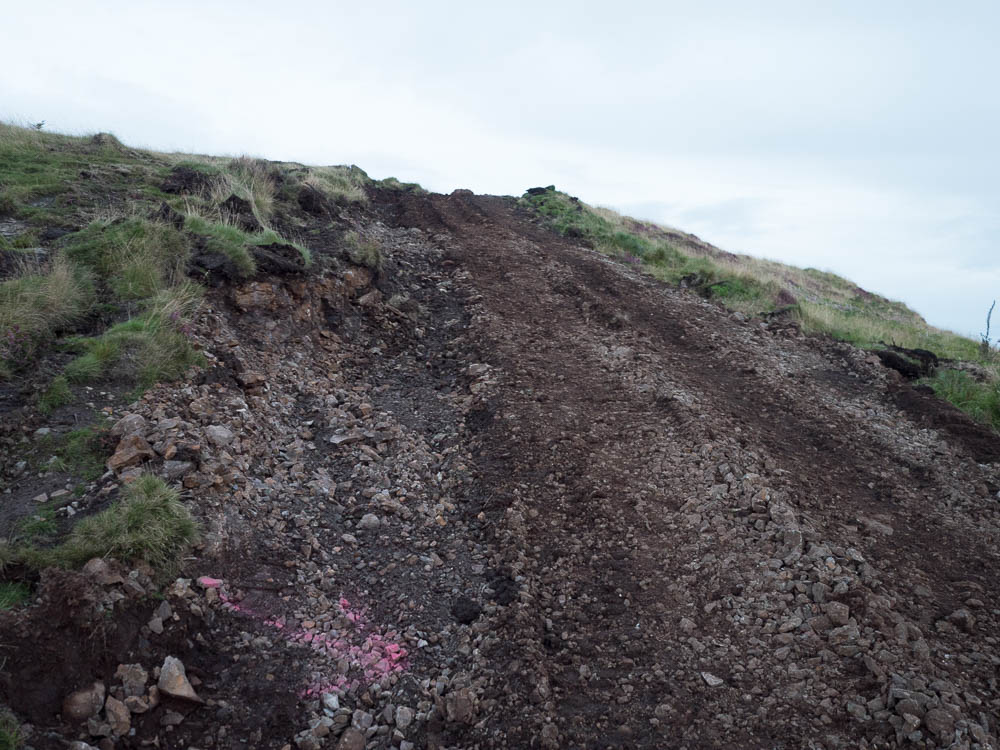 The next image shows the same area as the second image I posted earlier today; in the course of the day the contractor piled up a large amount of topsoil into this area obliterating the natural step at the end of the this section: 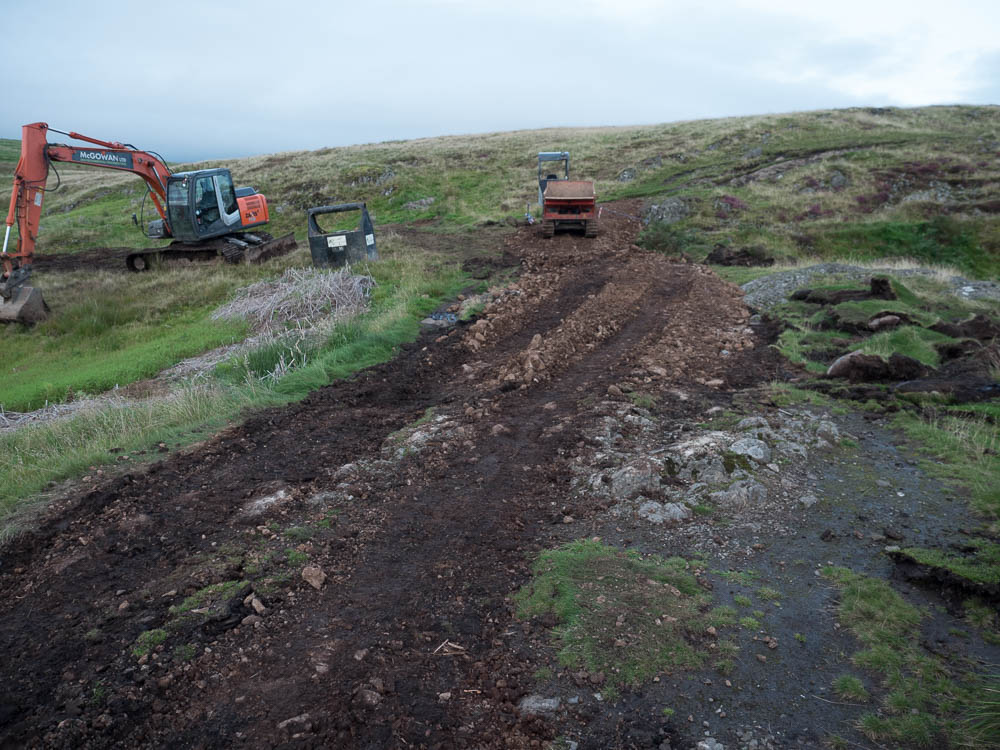 Detail of the fill, this is well over a foot in depth: 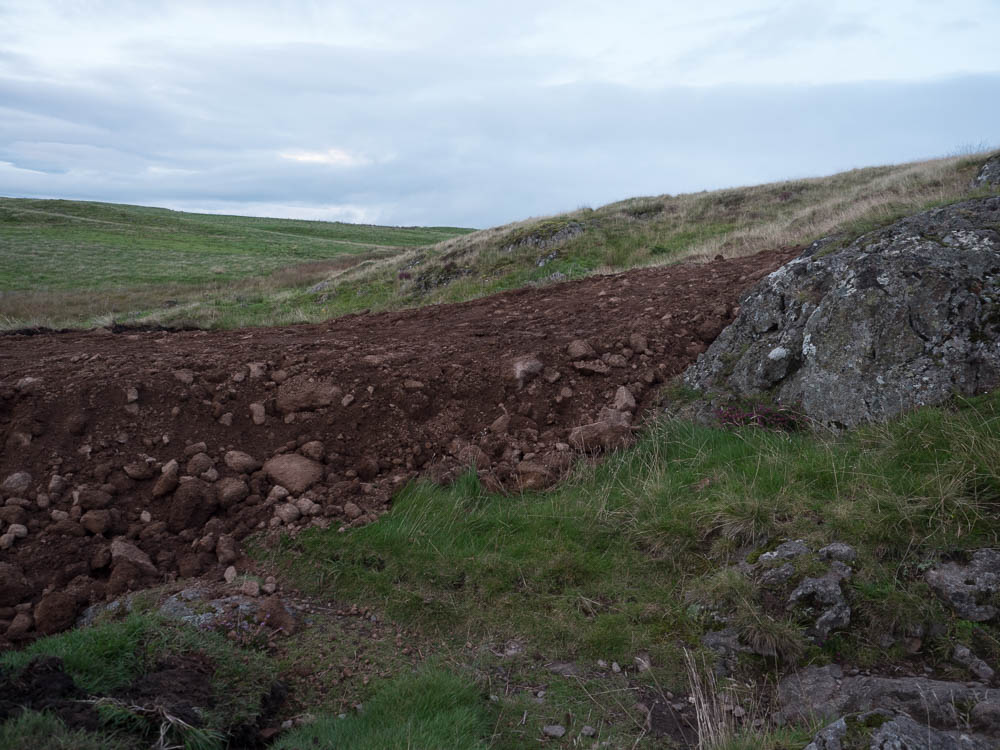 Just for reference, this is the old path that we are fixing here: 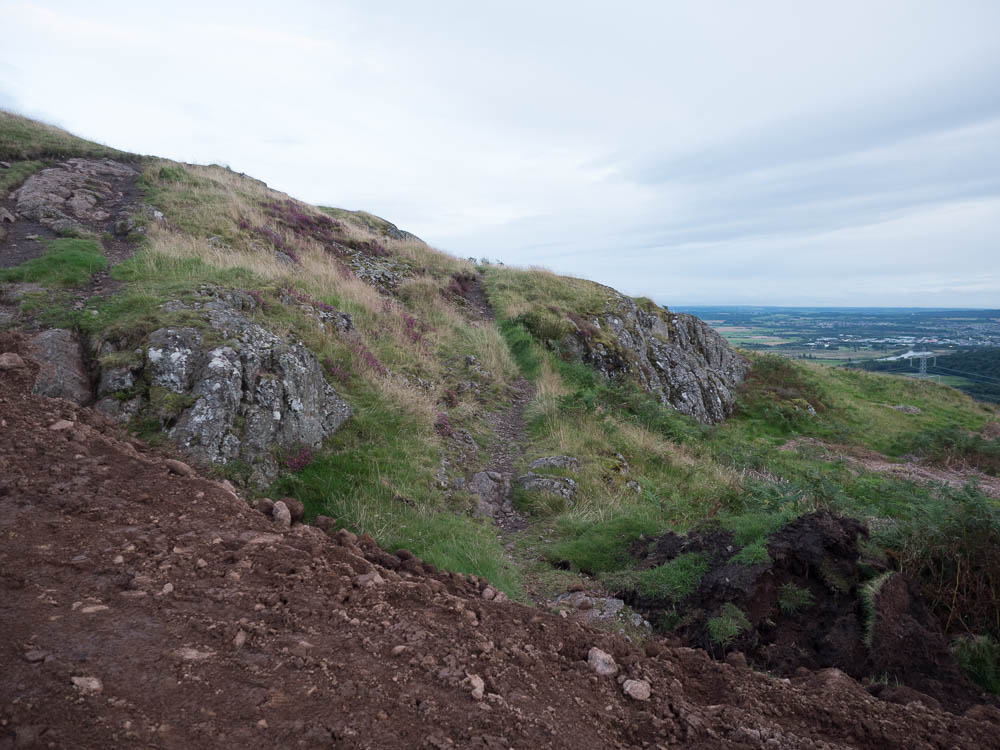 And the area the top soil for the fill was excavated from: 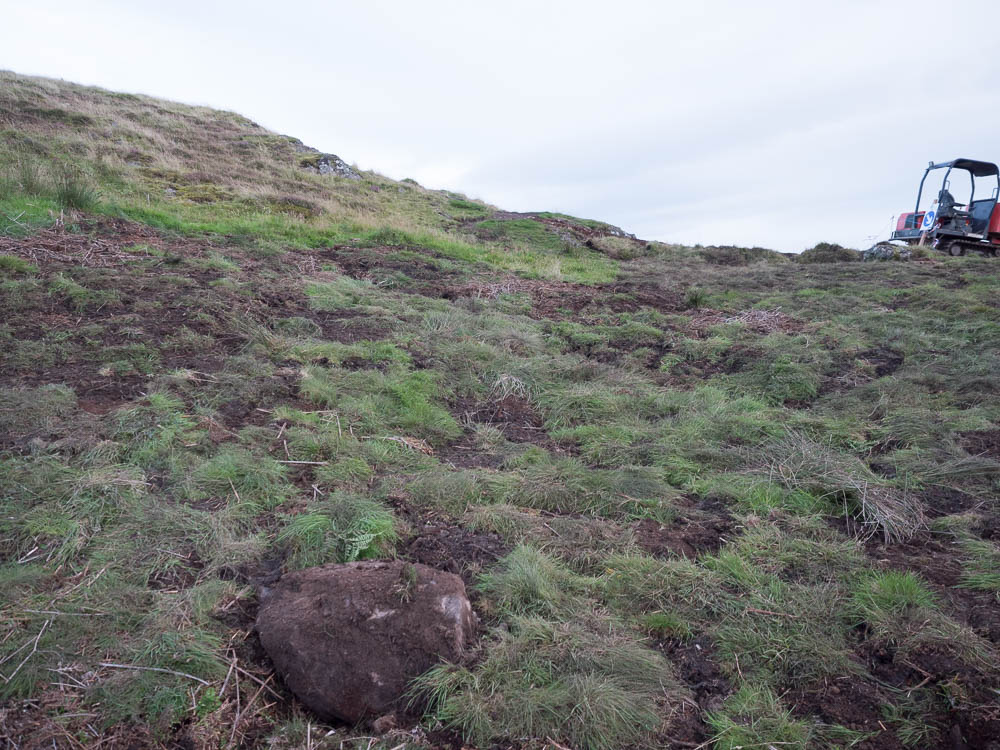 The contractor is McGowan Ltd, and they seem have a track record: 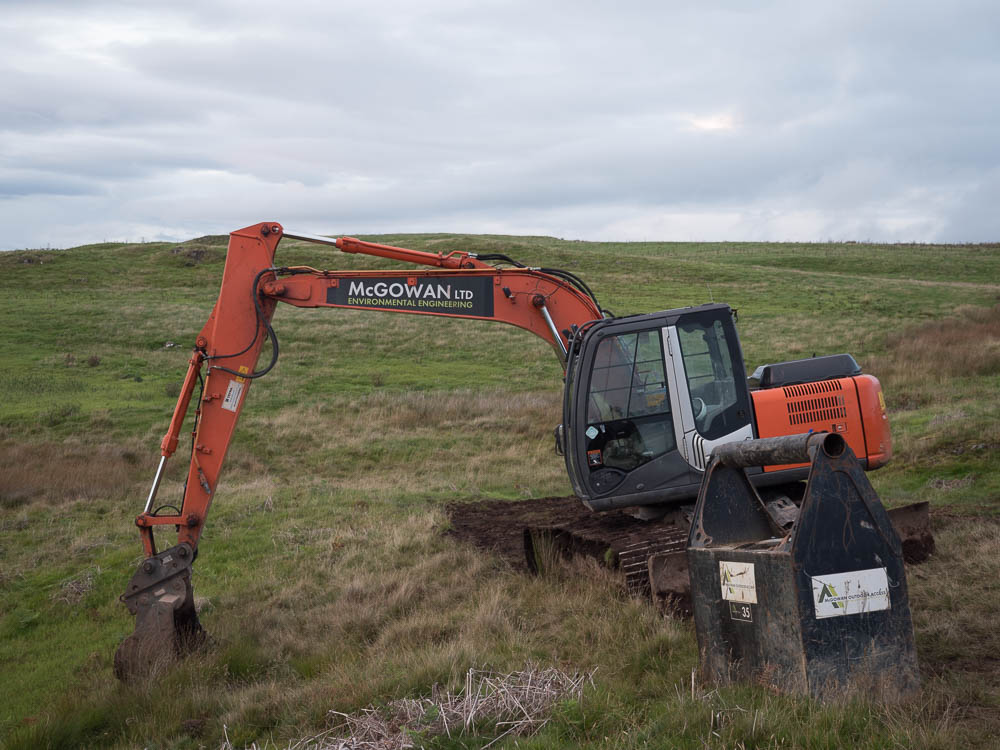 In case you find these images disturbing, let me assure you that they in fact don't do justice to the ugly reality, you might want to see for yourself if you are local.

It appears the local representative of Cycling UK was given access to the plans for the path, available here. What is clear is that the work undertaken is not in keeping with the agreed plans. Notably, the section covered by the following images was supposed to be 'hand-built only' using stone pitching; what a mess:

I am also concerned that the plan for the natural bog area around NS 8309 9761 is 'raised hardcore'.

Formal complaints to be addressed to SPEN on customercare@spenergynetworks.com.

There is no end of acquiring them, the search for the perfect camera bag seems endless. Here are some…

GPS Accuracy and the Automation Paradox

It's been a busy summer for UK's MRTs. Not a week has gone by without someone getting lost in…