Recently there has been some chatter about using lightweight footwear in the winter hills, and in that context microspikes have been mentioned. As someone who uses microspikes a lot, I'd really like to warn quite emphatically against taking microspikes into the hills as a substitute for crampons -- in some ways wearing microspikes can be considerably more dangerous than just wearing boots without crampons.

Don't get me wrong, I really like microspikes; they are an excellent tool for winter running. 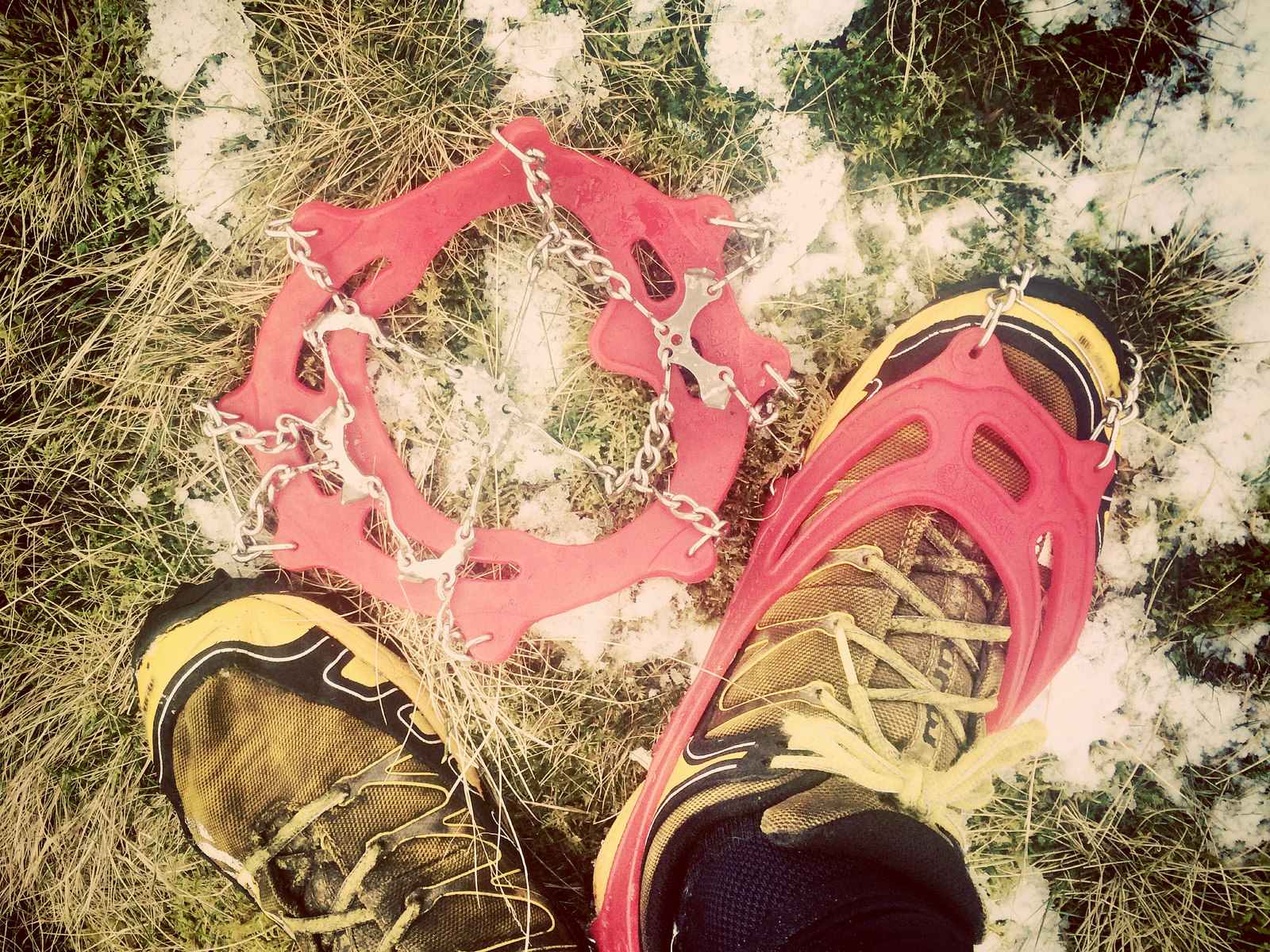 But they only work in a very limited range of conditions. Specifically, they are only suitable for moderately steep slopes, roughly speaking, slopes you can consistently keep the entire sole of your foot on the ground, and they only work well on pure, exposed, ice and hard neve. They do not work if the hard surface is covered by even a fairly small amount of loose, non-compacting, snow (e.g. blown-on dry powder), and they do not work on the cruddy snow that much of Scottish winter is made of -- the 9mm spikes are too short to find purchase.

But the real problem with microspikes is not that they have limits, all tools do, but rather that (a) they go from a superb secure grip to zero traction in a fraction of a second, and (b) that this tends to happen on a much steeper ground than would have if I were just wearing boots. With boots the loss of traction tends to be gradual, and I get plenty of warning to get the crampons out, or just to back off. In contrast, the microspikes will happily, and effortlessly, take me on a ground that in boots alone I would have long been aggressively kicking steps. This means that slipping with microspikes is likely to be a much more serious proposition than slipping with just my boots on. What gradient are you comfortable self arresting on? 10°? 30°? 45°?

This is not some just theoretical musing, it's something I have learnt the hard way. One January some years back I was doing my regular training run which takes in Ben Vorlich and Stuc a'Chroin from Braeleny Farm. The hills were in early winter conditions, and as was my habit at the time, I brought my standard winter gear of ice axe, microspikes and crocs (the latter for the several river crossing along the way). Ben Vorlich was nicely iced up and windswept, and the micros were working a treat. From the distance the Stuc a'Chroin 'Nordwand' did not look too bad, plenty of bare rock, and so I decided (to use a technical climbing term) 'to take a look at it'. 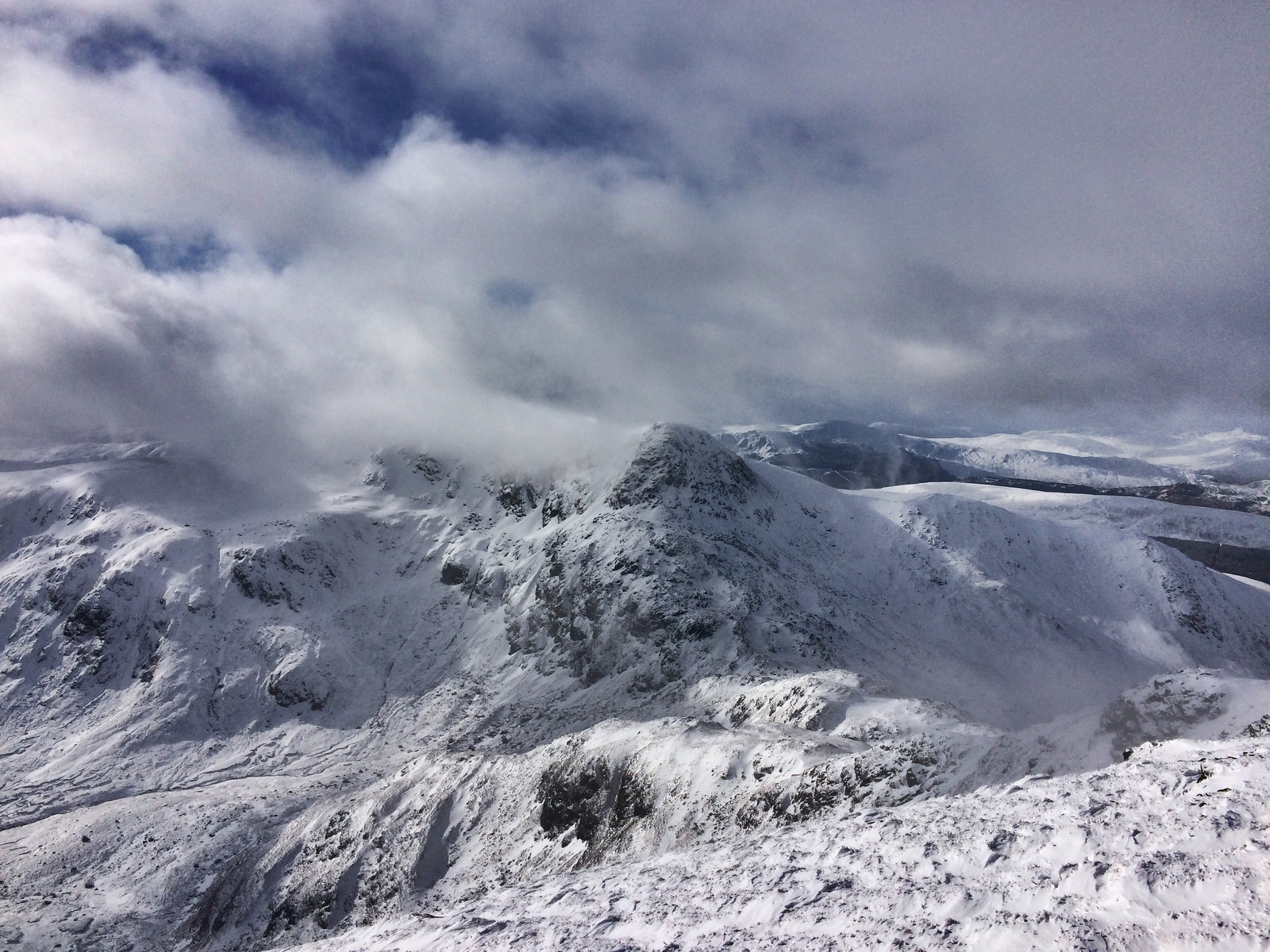 I gained height fairly quickly, and as I did the snow condition, and my traction, progressively deteriorated, until I reached an awkward steep groove where it was obvious that if I carried on any further I would not be able to back off. As I started down-climbing the true limitations of the microspikes became painfully obvious: if my traction going up was poor, it was nothing compared to going down. The next half hour, spent kicking in short step after step, was some of the tensest time I have ever experienced in winter hills (I once had a few awkward minutes in the Man Trap, nowhere near as bad, I dare say).

I made it safely to the foot of the buttress eventually and headed over to the broad corrie that in the summer is used to avoid the Nordwand. The snow conditions there were superb. The iced up neve put a big grin on my face as I made rapid progress up, though the upper section was way too steep for the micros, and I had to make great effort to keep at least my toebox on the slope over the final metres. But my axe placements were bombproof, the sun was shining, and my previous escapade was promptly forgotten. 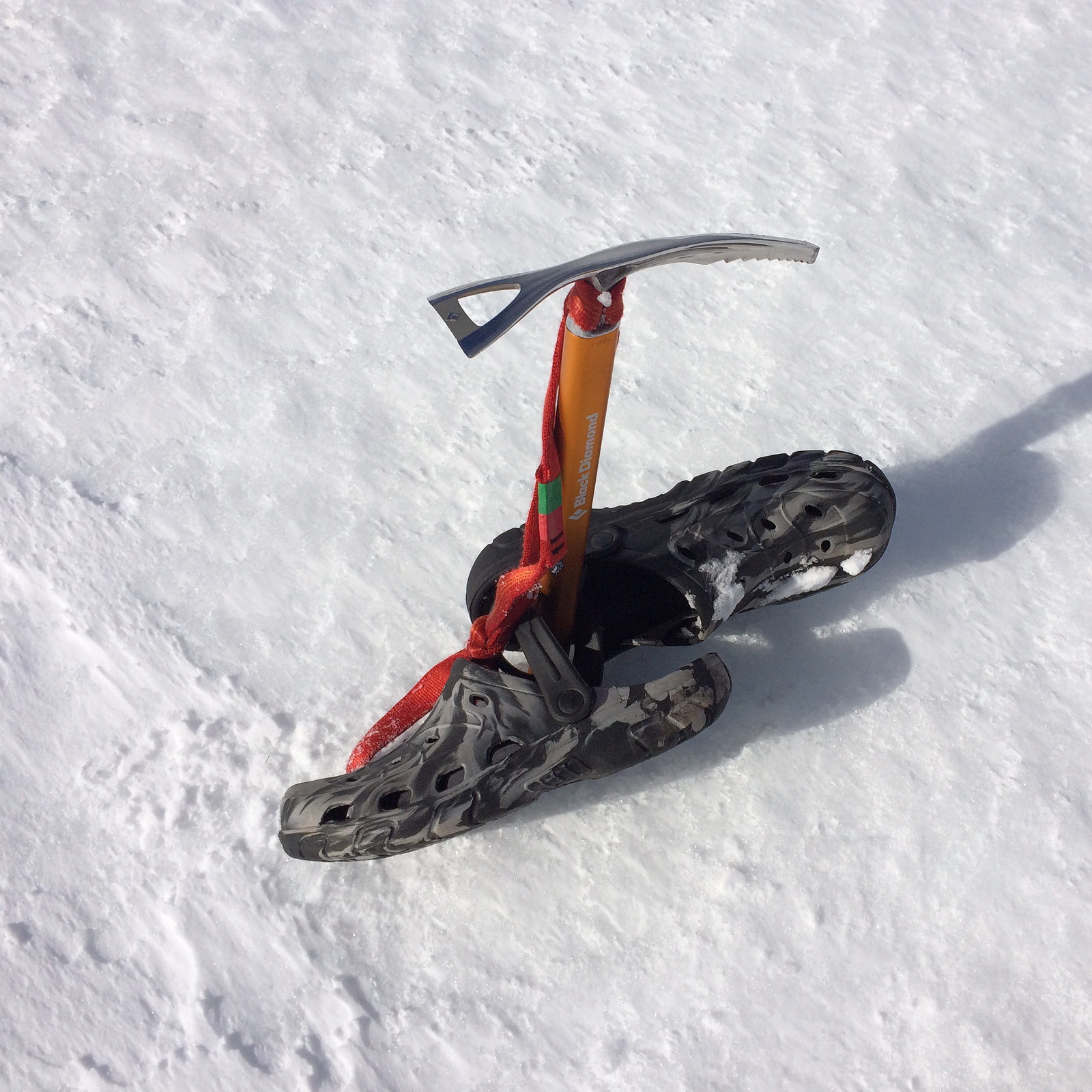 It is perhaps the sunshine, so rare in Scottish winter, that explains that a month later I am back, again wearing the micros. By now the winter is full on, and the Nordwand is plastered with snow -- I have no intention heading up there, I have learnt my lesson. Or so I think.

The first warning signs come on the descent to Bealach an Dubh Choirein. There is more snow, and a short steep section that needs to be down-climbed proves very awkward. It is a sign of things to come. The conditions in the NE corrie are much changed as well, the line I took out of here last time is topped up by a steep wall and a cornice, and is out of the question both because of the gradient and the avalanche risk. At the same time there is no sign of the perfect neve, and as I make my way up along the north edge of the corrie, I am struggling for any sort of a grip in the cruddy snow. I weave my way up through a series of awkward traverses and rocky steps, kicking and cutting, at times down to the vegetation. All that in the full knowledge that had I been wearing crampons, I wouldn't have given this sort of ground a second thought.

That day I decided to have a simple policy for my winter runs -- if the terrain is serious enough to require carrying an ice axe, I take crampons. No exceptions. At times it is tempting not to, all that extra weight. Indeed there have been times on a run I wished I had micros instead of crampons; it is almost invariably followed by a relief that I have brought the crampons, when a few miles on conditions change. And so when I am packing my gear and that temptation comes, I just think back to those days and the temptation goes away. Life is too precious, and the winter hills don't stand for hubris.

P.S. As I have mentioned elsewhere, I use the Kahtoola KTS crampon for running.

Strathfarrar Watershed (A View from the Sidelines)

I suspect most of those reading this have never heard of John Fleetwood. Recently someone described John as 'quietly…

To Eat or not to Eat (contd)

The disillusionment with the M&S curry aside, the biggest factor that forced me to rethink camping food…