In the last couple of years I have become a great fan of alcohol stoves. For three reasons. On short trips they are very weight-efficient. Alcohol is a much more environmentally friendly fuel than gas. And alcohol stoves are cheap to run!

As I have mentioned before, through my childhood and teenage years outdoor cooking involved an open fire. My first real stove was MSR WhisperLite™ purchased in the Mountain Equipment Coop in Vancouver in ’96. I still have it, with the original seals and that, though I haven’t used it for some years. The truth is that petrol stoves really come into their own on long remote trips and I don’t do those. And they take a bit of getting used to, the priming can easily get out of hand!

(On one particularly memorable occasion in Glen Brittle in the late ’90s the WhisperLite™ got me invited to cook in the kitchen of a giant luxury mobile home by a kind German couple who thought my stove was broken when I misjudged the volume of the priming fuel resulting in a flare worthy of Grangemouth. The trick, I learnt eventually, is to use little cotton wool and meths, but by then I also realised that this, excellent, stove was a poor match to my needs.)

And so, like everyone else, I switched to gas.

Gas stoves, without a question, win on the convenience front. There is no risk of spilling stinky fuel, no priming. But they have their drawbacks, not least the fuel is expensive and environmentally unfriendly — the LPG gas brings with it the whole oil industry baggage, the cartridges are manufactured in the Far East then shipped around the globe, and, being non-refillable, they end up in landfill (or left in a bothy); these things increasingly bother me.

Gas stoves are also rather weight inefficient. I didn’t fully appreciate this until I started thinking of multi day running trips, and was forced to rationalise the weight of my kit. My first move was, of course, a lighter gas stove, the 25g BRS-3000T. It only took a couple of trips to realise this was a dangerous piece of crap (mine flares uncontrollably sideways at any attempt to reduce the flame; sometimes we really get what we pay for).

In any case, if the objective is to reduce weight, even the lightest of gas stoves doesn’t help much, for the fundamental problem lies with the canister: on the one hand, I have very little control over how much fuel I take, and on the other the canister is far too heavy. So if my requirement is, say, for 60g of gas, I have to take 110g, plus the 120g of the canister; if I need 120g, I have to take 220g of it, plus 180g of the canister, etc.

Just as petrol/kerosine stoves beat gas in the weight game for long trips, alcohol stoves do so for short trips. Alcohol has two big advantages: it is very easy to store and transport, with minimal weight overheads, and it is very easy to burn, making it possible to create simple, light stoves.

Of course, burning alcohol produces only about half the amount of energy per weight as gas. But for short trips this is more than offset by the weight of the canister: if you need 60g of gas you have to pack 230g of fuel + canister; for an alcohol stove the equivalent will come to ~140g. Broadly speaking the weight game works out in favour of alcohol, or at least level pegging, until you need enough fuel to take the big 460g gas canister. How long a trip that is will depend on your cooking style, but in my case that is 3+ solo nights when snow melting, and something like 10+ nights in the summer.

And alcohol is cheap, and the environmental footprint is much smaller. There are, of course, downsides, most notably cooking with alcohol takes longer, how much longer will depend on the actual stove, so let’s talk about the stoves.

Alcohol burners come in two basic types: pressurised and unpressurised. An unpressurised stove is really just a small bowl holding the fuel, burning the vapours as they rise from the surface. While this works perfectly fine, such an open bath stove is potentially quite dangerous because of the risk of spilling the burning fuel; this is easily remedied by filling the bowl with some kind of a fireproof porous material. The simplicity means unpressurised stoves are usually home, or cottage, made.

In case of a pressurised stove, the fuel vapour is expelled under pressure from an enclosed fuel reservoir through a series small holes, resulting in discrete jets of flame. Unlike with petrol/kerosene this pressure is simply created by heating up the fuel in the reservoir, and is not very high. It, however, means that the stove has to have some way of priming. Most often it comes in the form of an open bath in the centre of the burner. The best known pressurised alcohol stove is undoubtedly the Trangia, but this type of burner can also be made fairly easily at home from a beer can, e.g., the famous Penny Stove — beer can stoves are neat and really fun to experiment with (but they are also quite large and fragile).

(Before going any further, it is worth saying that alcohol stoves always need a windshield, the flame is just too feeble to cope with even a slight breeze. The cheapest, and also most lightweight option is to make some from a double layer of kitchen foil. If you look after it, it will last quite a while, but it is too light for use in real wind, though perfectly fine for in-tent use. Of course, alternatives, commercial or otherwise, exist.)

Back to stoves. So, which one is better, pressurised or not? The cued up reader, who undoubtedly now expects a detailed discussion on fuel efficiency of the different designs is going to be most disappointed in me. As exciting as carefully measuring the fuel burnt by different models to find the Ultimate Stove is, when it comes to alcohol such comparisons are of a very limited value.

The fuel efficiency of any stove really comes down to a single thing: is the vapourised fuel mixed with enough oxygen to allow complete combustion? In the case of all alcohol stoves the mixing happens above the burner, and so is given more by the size of the pot, its distance from the burner, and the airflow provided by the windshield, than the design of the burner itself. Consequently any comparison is only valid for the one specific testing configuration, and you will almost certainly be able to come up with a different setup to produce quite different results.

OK, but, which is better? They both have advantages and disadvantages. The great thing about unpressurised burners is you can put in as little or as much fuel in as you want, and if there is any left, you screw the lid on, and it will keep till the next time. Also the variety with the absorbent material is the safest alcohol stove there is (and one shouldn’t really underestimate the danger of spilling the burning fuel, as the flames are nigh invisible).

The main advantage of a pressurised stove is a higher rate of burn, i.e., it cooks faster. But it is quite difficult to make a really tiny one, because below certain size the priming/gasification doesn’t work very well. Also the usual method of priming from an open bath on the top of the burner is super inefficient, and for there to be enough fuel in the bath, the stove generally needs to be filled near to capacity. For the smaller stoves, this will be around 30ml — if like me you only use 50ml per day and less than 15ml at a time, this a nuisance, as there is always unavoidable significant loss due to continued evaporation while the stove cools down before you can pour the excess out of it, and there is always spillage draining it.

If the burner doesn’t sit directly on the ground, it is possible to prime from below, using a small vessel, e.g., a bottle cap. This is much more efficient and needs just a few drops of fuel. But it is quite tricky to get right and requires practice — if you use too much fuel, you get a flair up, not ideal in a tent!

An unpressurised stove is great for solo summer use. Mine is of the makeup case variety; if you look carefully, you can see it among my other cooking paraphernalia in the title picture (taken on an unexpectedly cold autumn morning in the Cairngorms; the -4C meant I had to boil an extra pot that morning to pour into the running shoes to soften them up).

The stove came from redspeedster on eBay (you could easily make your own, but it’s not worth sourcing the materials for just one). It has a 30ml capacity, and with the nice pot supports he also makes comes to 24g. In my setup using 1/2l pot it will bring 400ml from 8C to rolling boil in about 12min, using 11g of fuel — yes, it’s slow, but then I rarely need rolling boil, so my actual ‘boil’ time is ~8 min, and really, I have all the time in the world, after all I am escaping the time-obsessed rat race.

But once you start looking at cooking for more than one person the unpressurised stove becomes impractical. I still want something small, i.e., not the family sized Trangia, but nevertheless something faster.

The Vargo Triad fits the bill. It’s a nicely made little gadget, and has about double the rate of burn of my makeup stove, bringing 0.8l of water from 8C to rolling boil in just under 13min, using 23g of fuel. This will do nicely for our next summer trip, I reckon. It’s a pity the burner does not have a cap, but I have cut a circle from a silicon baking sheet to cover it, which reduces fuel evaporation after the stove is extinguished and is cooling down. 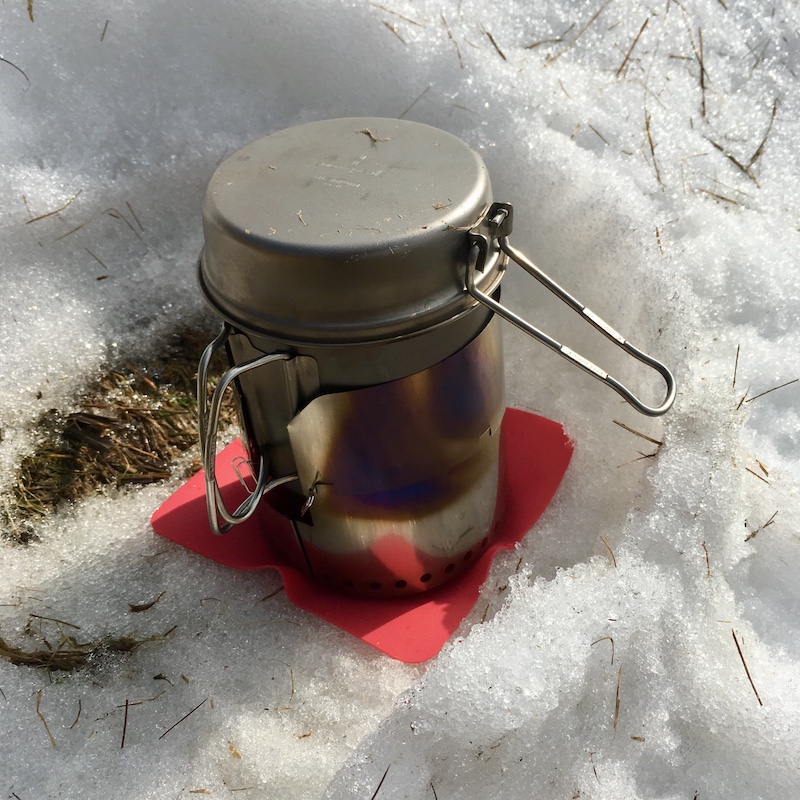 My current quest is to find an alcohol stove I’d be happy with for winter use. During winter I tend to heat up about twice the amount of water than I do during the summer (~3l), while at the same time snow melting roughly doubles the energy requirements (I am sure I could cut this down by manning up, but TBH, the winter brings enough misery as it is). The Triad at near-full fill of 35g of fuel will just bring 1/2 litre of water from snow to boil in 20min — for winter solo use I think this is borderline, I’d prefer something that would do about 0.8l at a time and a bit faster.

The Vargo Decagon looks a possible option. The 60ml capacity should be enough to melt 0.8l from snow, and it appears to have considerably higher burn rate than the Triad. But by all accounts, the Decagon is very slow priming, and unlike the Triad the pot can’t go on until the priming is finished (the pot sits directly on the top of the burner, so it conducts heat away from the burner); it also doesn’t lend itself as well to bottom priming as the Triad, nor can be so easily capped. Nevertheless, I am keen to give it try, preferably while there is still some snow in the local hills.

When the row over the National Trust for Scotland trademarking the name ‘Glencoe’ erupted last summer, I had never…

It’s been a long time since Linda and I climbed Beinn Dubhchraig. Just another couple of Munros bagged.…